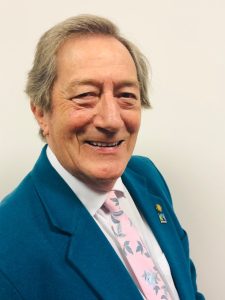 We are extremely fortunate and grateful to Dr. Michael Hardacre Wolverhampton Cabinet Member for Education and Skills for his generous donation to the Music service of an excellent Saxophone, Ukuleles, stands and music. Thank you for your support and we look forward to continue seeing you at many of our Music Service events in the future! The instruments and music will be put to good use to benefit students in the city. As well as his tireless work for Education in the City Mike can also be heard on 101.8 WCR FM presenting “Milestones and all that Jazz”   From 12:00 am every Tuesday

My first memory of music was listening to the BBC light programme and its (even for the fifties) old fashioned approach to music – ersatz dance bands and occasional forays into young people’s music – nothing so raucous as Rock and Roll.

And then when I was about 12, I was bought a small portable transistor radio which I carried round in a leather case slung over my shoulder and a single earphone – this after I’d starting annoying passers by who didn’t approve of my diet of Radio Luxemburg and what were then known as pirate radio stations featuring pop and particularly American pop music. It was at this time that I discovered what in America was termed Rhythm and Blues but which was actually the music of Black Americans and an electrified form of the rural blues that had developed out of field hollers and work songs from when they were slaves or share-croppers in the 19th and early 20th centuries.

This music played by Little Richard, Chuck Berry, Muddy Waters, Howling Wolf, Bobby Bland, Jimmy Reed et al spoke to me with a raw power about the plight of the powerless in society and the struggle for equality despite the emancipation Acts of a hundred years previously. It was also the height of the fight for Civil Rights in America.

From there I dabbled in early Bob Dylan – it took me several years to gain any insight into his mid-career electric work – and by then he had gone somewhere else again.

At this time, I started to listen to more and more jazz and settled on Miles Davis as my idol – another man who like Dylan changed his music style as he grew older – with a similar ability to split his audience because the steps were too great for his audience.

This love for jazz has never left me and I have 26.3 days of jazz on my iTunes cache ranging from Louis Armstrong to Snarky Puppy.

The next biggest category is classical with 5.2 days. I became interested because my best mate ‘s Uncle ran the Blackburn Choral Society whose diet extended beyond the Messiah at Xmas and either Stainer’s Crucifixion or Elgar’s The Dream of Gerontius at Easter – each summer they hosted their version of the Proms – four summer concerts featuring Barbirolli and the Halle Orchestra and Charles Groves and the Liverpool Philharmonic. My mate and I offered to sell programmes in the hall, and we got to attend the concert for free and received a small emolument for our efforts. The programme was quite eclectic, and I remember hearing Stravinsky, Shostakovich and Kabalevsky as well as the greats of Debussy, Dvorak, Tchaikovsky, Beethoven. I also had the privilege of watching John Ogden playing just after he had won the international Tchaikovsky prize in the sixties – you would have thought the hall was going to explode from the volume of applause.

A varied diet and inevitably a love of the music of my teenage years – Sinatra, Bobby Darin, The Animals and later Deep Purple and Emerson Lake and Palmer – pop music pretty well stopped at that point for me.